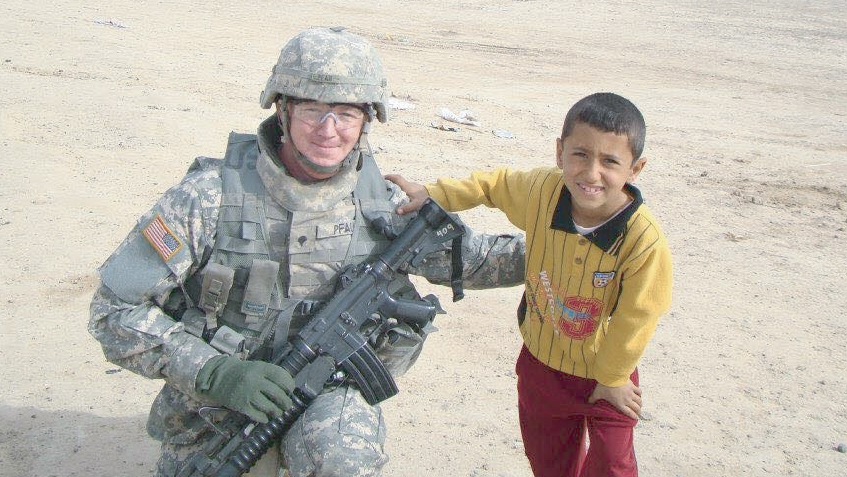 Did you know that less than 1% of Americans join the Armed Forces, I am part of that 1%. Starting at a very young age, I have always been into helping people. I grew up with a single mother that did her amazingly best to provide for myself, my two brothers and my sister. We grew up very poor and sometimes living in shelters. I have always done what I could to help my mother out from going out shoveling snow in the winter, to mowing grass, and doing odd jobs in the summer. As my mother worked a full time job, we as kids had to sometimes provide in many ways of our own. That’s where I learned that I had to work hard for everything and nothing comes easy.

While school was not my favorite place to be, I still graduated but barely. During my high school years, I knew that I couldn’t go to college, it just wasn’t an option for me. Remember, was not my favorite. At the time, I did not realize how much my mother did love me and provided for me. So during my stubborn teenage years, it is unfortunate that my mother and I had a fallen out. It took many years but we reconciled and realized I was just a dumb kid. My loving mother understood. She knew that no matter what she would always love me. So during my high school years, I would work a full time job and go to school. I thank the teachers that were understanding when I did not get my homework done.

I managed to always stay out of trouble. Don’t know honestly how I managed that in some of the places I lived. It was the support of very friends that I had. So, during high school, I always tried to help others out. Sometimes putting myself, friends and family last. With still being young joining the police force was not an option. So one day during school lunch, me and some friends had a serious conversation. That conversation lead to me making a life changing decision.

After I graduated high school, started one of the most rewarding careers in my life. The United States Army was the toughest job, but the best. Where else can you get paid 24/7, full medical and dental benefits, as well as 30 days of leave a year. It is the best job in the world. You can do anything you want, with many rewards for doing it. Many options were put before me as far as jobs go. So I chose wisely and joined the Infantry, the best MOS job the U.S. Army had to offer. While basic wasn’t any fun at times. Hands down was the one of the best experiences I had. Almost 20 years later I am still best friends with my original battle buddy from basic training. Granted we are both fatter, broke, and still good looking with good looking wives.

As my career in the U.S. Army started, so did life. Being stationed at Fort Hood, Texas was a huge difference than being from a small town in Maryland. When they said things were bigger in Texas, they were not lying. I had a little bit more time to adjust than most, because when I arrived at A co 2-5 Cav, 1st CAV DIV they were still deployed to Kuwait. When my future brother returned they welcomed me with open arms, then left me again for leave. Boy when they got back, it was awesome. Some days were ups and some were down, but together we got through it. I had to work a little harder to prove my worth, since I did not deploy with them. Being the people that they are, they accepted me fairly fast. During basic training, I learned to shoot. That’s when my love for firearms began. Being on active duty we had a lot more chances to train with our rifles, which I loved doing some days and some days just wanted to stay in bed.

During my years at Fort Hood, I learned how to drive, shoot and command an M2 Bradley Fighting vehicle. It wasn’t a tank, but to me it was much better. While it was not the small arms I loved, I still did dismount training with passion. Every chance I got, I went to the range. Whether it was to do details, shoot or teach what little I knew at the time. We had awesome NCO’s that took the time to teach you what you needed to know. They never got annoyed by all the questions us Privates asked, well not all the time.

After my time on active duty, I decided to make a decision to go back home. With that decision I didn’t stop serving my Country. I joined the Maryland National Guard, where the second part of career began.
Towards the end of my active duty time, I had met my wife. She supported all my military decisions, even ones that were stupid. So the beginning of my National Guard career I stayed true to heart and stayed in the Infantry for many years to come. During those years I had multiple deployments state side and one overseas to my first war zone, Iraq. During my years in the guard, I took up more and more shooting skills for handguns. I picked the brain of many of my soldiers, as some of them were skilled law enforcement officers. We went shooting whenever we could.

Many years had passed when I had to make another career decision, that one wasn’t so easy. It was because I had to switch MOS in the Army. So I went from being in the Infantry, to going to being in the Aviation. Which is another rewarding job in the military. I chose to become a 15B, which is a Helicopter Engine Mechanic. Needless to say that was short-lived due to one of my great NCO’s found out I had some logistics experience. Once I got back from my Aviation school, I was sucked into logistics. Being there I learned a lot more of what went into the behind the scenes of supplying soldiers with what they need. During that time, we had one deployment to Kuwait, which was so different from being in a combat zone, it was more relaxed.

During my time in Aviation I had helped many soldiers qualify on their rifles, which is a requirement in the Military. That being said, in some ways I really enjoyed it. I started doing it more and more. I helped officers with their pistol qualifications, and soldiers with their rifle qualifications. It was much more rewarding then some of the other things I had to do as a Logistics specialist. With me getting more and more into training, a few of the people asked me to help them on the civilian side. Getting ready for the police academy, or security guard positions, and also just recreational shooting.

With all the experience I had gained from learning from professionals in the Army. I decided to take what I knew and open my current business, Peacock Training Institute. I decided to make another huge decision, and leave the place that had taught me so much about life. Once that decision was made, I went full time in opening my firearms training business. Once I had the business established I got a part time job working at the Post Office. I know odd combination isn’t.

Through the journey of opening my business, I met even more inspirational people that got me through some tough times in recent years. I had lost my mother a week before Mother’s Day 2017. That was the worst day of my life. After that, I had a very rough year. If it wasn’t for my inspirational people in my life I honestly wouldn’t know what I would have done. During my rough time, I had the pleasure of encountering Veterans Outreach Ministries. All I can say is their inspirational words and support gave me even more strength to get up and fight. So I did, and I won.

My life has been full of ups, downs, and uncertainties, but the people we along our way are meant to be put in our path at the right times. Fellow business owner and veteran, got me through a lot with learning Yoga. Yes I have now learned, real men do yoga. My mother’s Chemo nurse, gave me strength. I knew if I couldn’t be there with my mom that day, she would be in good hands. That nurse, found out she had she got Breast Cancer. Long story short, she kicked its ass. So in turn, no matter what we go through in life or what we have been through. Everything happens for a reason. Whether it would be separating from a loved one to grow stronger or meeting new people that give you joy, inspiration, and health.

Love everyone, live your life as if there is no tomorrow, Always pay it forward.